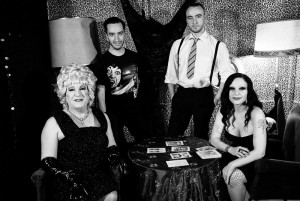 The answer was clear: the guest star on the forthcoming episode of Mrs. Carrington is the wonderfully fabulous Alaska.

The singer of Fangoria plays an old acquaintace of Leona, who requires her services to get rid of a certain nuisance. A hatted, gloved nuisance if you catch my drift…

Episode numer 10 is entitled “Bad Omens” and will premiere in not one but two parties at the popular pub Six Colours of Granada, Spain, where the series is produced. The episode will be available on the internet from Monday the 19th.